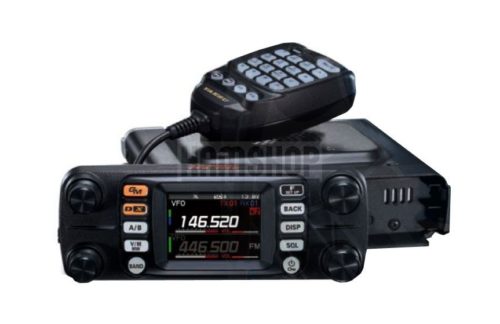 The new FTM-300DR/E provides stable and reliable SOW RF power output. As in recent YAESU mobile
transceivers, the FTM-300DR/E is also equipped with a heavy-duty heat sink that includes our exclusive FACC

Real Dual Band Operation (V+V, U+U, V+U, U+V) is available with two independent receivers, and the FTM-
300DR/E supports simultaneous C4FM digital monitoring for both the A and B bands.

Memory Channel Band Auto Grouping (MBAG) is one of the advanced features of the FTM-300DR. Memory channels are automatically categorized in each band, and memory channels can be easily and quickly recalled by 4 Band Groups – Airband(M-AIR), VHF(M-VHF), UHF(M-UHF) and 174-400MHz/ 480-999.99MHz (M-GEN).

3W audio power speaker ensures a clear and crisp audio – that has been specifically tuned for quality audio. Two individual external speaker jacks are provided. Users can output the VFO A and B band Receiver to separate speakers or mix A and B signals when a single external speaker is used.

Built-in Bluetooth unit is installed in the FTM-300DR. This enables the hands-free operation with the YAESU SSMBT10 or a commercially available product. The SSM-BT10 is equipped with a PTT button and also supports VOX operation. Using the new USB charger cable – SCU-41 with the controller of the FTM-300DR, the SSM-BT10 can be easily charged. The SSM-BT10 works for approximately 20 hours on single charge.

The FTM-300DR supports both the WiRES-X Portable Digital Node function and Fixed Node function with the HRI-200. Since simultaneous C4FM monitoring on both VFO A and VFO B is possible, users can enjoy both WiRES-X communications on one channel while monitoring another local channel at the same time.

Other advanced features of the new FTM-300DR include